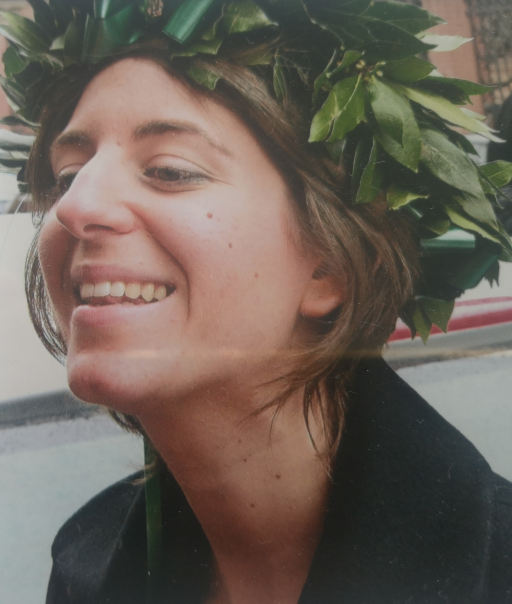 Photo of my graduation in Bologna, March 2006

People are quite surprised about me holding a PhD in Molecular Biology.

It is unusual that someone that decided to embark into an Academic career is becoming a Yoga teacher and then a Rolfing® practitioner.

The reality is that the way I carry out my work is not much different from the way a researcher would approach her/his research project. In other words, my priority is to be able to fully engage in the work I do and my job needs to make sense for me and for the people I work with.

Let’s go one step back for a moment.

I have been fascinated by life since I was a kid. And for me the word “life” meant (and still means) not only its understanding from a scientific point of view but also its impact on the emotions and psychology of humans. “Life” to me makes sense only if embedded in a social/human contest. And that is probably the main reason why I have never really enjoyed the work in the lab, it felt way too detached from “real life”.

Researching how cells organise themselves in order to keep life going has been my PhD topic for almost 5 years and it has been at times exciting and at times incredibly challenging. However, I could never completely grasp the purpose of all that time I spent in the lab. How much impact my research really had on the world? And how much impact do most of the research projects carried out in the millions of labs around the world really have? Probably they do but with an amplitude that it’s hard for me to make sense of.

The point here is that to find a purpose in what I do, my work must show a positive impact on the well-being of the people I have the privilege to work with and if I can support even just one person to find a better place to stand in life, the entire humanity will profit from it. And as much as my time as a PhD student has been an interesting, exciting and challenging period of my life, I could never fully find my purpose in it.

Initially Yoga helped me to find myself again, to ground in a moment where it was clear that pursuing a career in the Academic world wasn’t my call but still I couldn’t figure out which way to go. Moving to the Corporate world for a few years gave me the time to build up a safety net where I eventually could jump back into. And finally, the decision to start teaching Yoga felt like the closest thing to what I now believe I can do best: empowering humans through the process of “owning” their bodies again.

From the first moment I started teaching Yoga, my curiosity was mainly taken by the way bodies move rather than by the Yoga itself. In the Mysore Style setting, I can observe different bodies moving through the same Yoga postures and it is incredibly interesting to see how each body approaches the same movement in a completely different way: some can go through a specific posture pretty easily whereas some cannot even come close to that.

And here is the point where I am again a researcher, where my mind starts speculating on the various reasons behind those completely different movement patterns

If before I was working in a lab and studying cell division on a very detailed level, now I am working in a Yoga studio or on a massage table and I observe how bodies move and feel and I try to understand what could be the reason for a specific movement pattern. And from there starts my research project that goes hand in hand with the feedback/exploration of my students/clients.

Yoga gives me the possibility to see the bodies in movement and Rolfing® allows me to get a very clear and detailed feeling of what sits under the skin, both integrating each other incredibly well.

And what makes my current work way more interesting than the work in the lab, is its impact on the emotional well-being of people as they embark into the exploration of their bodies. Because, at the end of the day (and here I paraphrase David Svenson, a very well known Ashtangi) a Yogi is someone that leaves the world a little bit better than how s/he found it. And it is undeniable that supporting humans to make sense of that thing they call “body, to “own” it, empowers them to an extent that has no equals.